As a professional ceramic sculptor for over 30 years, Neil Dalrymple has developed a wide range of subjects for his work. His main themes are fish sculptures, wildlife in their natural habitats, birds, mythology and nude life model studies.

Neil Dalrymple initial training as an art student began at Wrexham Art College in North Wales. This was followed by majoring in Ceramic Design at Loughborough College of Art and Design from which he graduated and progressed to achieving his Art Teacher’s Certificate at Cardiff University.

From 1975-1985 he lived in British Columbia in Canada in both Victoria and Vancouver. Living an outdoor life helped to inspire his interest in fish sculptures and wildlife art. Neil Dalrymple also drew on experience as a teacher and worked in schools with children on various sculpture projects.

Neil returned to the UK in 1985 and based his studio in Ruthin, Denbighshire in the Vale of Clwyd which had been his former home.

The workshop is based at Ruthin Craft Centre which has a number of units occupied by other artists and crafts people as well as a gallery displaying contemporary work. 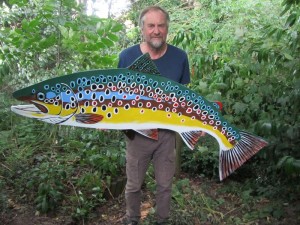 Neil has run several sculpture workshops and been artist in residence at Wallsworth Hall (‘Nature in Art’ Gallery) at Twigworth in Gloucestershire. Alongside producing private commissions and work for exhibitions, Neil has spent many years working in schools with children of all ages initially in Canada and now in North Wales and Merseyside. His role as artist in residence has been to create a series of ceramic wall murals ranging in size from 4ft to 24ft wide as well as working on other sculptural projects and course work. The themes have focused on creating sculptural relief depicting local scenery, wildlife, industry as well as local mythology. The familiar and local themes of the murals help children to be inspired to participate and all of them are encouraged to give their best and take pride in their individual contributions to the completed work.